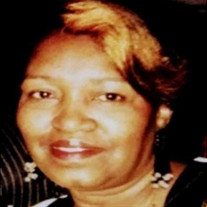 Delois Jean Pratt, daughter of the late Evangelist Pauline Taylor-Reeves and the late James Albert Reeves was born in Sanford, North Carolina on July 19, 1942. Delois was summoned to eternal rest on August 15, 2020. Delois was educated in the North Carolina School Systems, graduating from Springfield High School. She then matriculated to North Carolina Central College majoring in Business Administration. In 1963, she met and married William “Bill” Pratt, Jr. They then moved to Baltimore, Maryland to build their family structure. Their union brought forth three healthy children. In 1983, Delois began working at the Social Security Administration as a Scout for her module. She tirelessly served and provided a much needed service for the most unrepresented thousands of clients over the years. Delois served her unit with dedication and high achievement for 40 years. Delois decided to retire in 2012 to spend time enjoying her family, and enjoying life. Delois loved talking to her older sister Shirley everyday at 1:30pm, doing scratch offs and her crossword puzzles. Delois was preceded in death by her daughter Deborah C. Pratt, sister, Catherine O. Barnes and brother Leavon Reeves. She leaves to mourn her loss (Daughter) Jacqueline K. West, (Son) William Van Pratt III, (Sister) Shirley Allen, (Grandsons) Ivan Pratt and Joseph Alexander Jr, (Grand-daughters) Merissa Pratt and Vanity Pratt, (Great-Grandson) Tristian Brown, (Great-Grand daughter) Heaven Moreno-Pratt, and a host of nieces, nephews, cousins, and a Very Special Friend and Confidant Ms. Odessa Potillio. While we are all saddened to no longer have one of our family matriarch’s, her legacy will continue to thrive through all that loved her. “And God will wipe away every tear from their eyes; there shall be no more death, nor sorrow, nor crying. There shall be no more pain, for the former things have passed away.” Rev 21:4 KJV

The family of Mrs. Delois Jean Pratt, created this Life Tributes page to make it easy to share your memories.