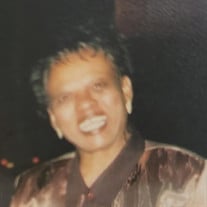 A Time To Live Deirtra “Dee Dee” Rahman was born in Baltimore, Maryland to the late James (JB) and Genevieve Booth on August 20, 1947. In addition to her parents, Dee Dee was preceded in death by her three siblings: James Henry, Howard Reed, Barbara Reed, Ann Shirley Spriggs and her beloved daughter Annette Booth Nesbit. She was a life-long resident of Baltimore and received her education in Baltimore City Public Schools. Dee married the late Abdul Rahman-El “Mr. Cliff” in 1977 and they shared 44 years of union. Dee retired from the Baltimore City Public School System as a Crossing Guard. One of Dee’s most cherished accomplishments was receiving her certification in upholstery. Dee Dee will be remembered for her love of family gatherings, especially a good cook-out where you were guaranteed a taste of her infamous potato salad. Dee found joy in watching her family grow and was proud of her grandchildren, whom she bragged fondly about every opportunity that came her way. Dee coined herself as the life of the party and assumed that no party should start until she arrived. She did not want to miss one moment of an event and, if she did, she insisted that someone fill her in on what had happened every single second before she arrived. Dee could not leave a conversation without saying “read my lips”. This phrase was her way of letting her loved ones know that she meant business. Bingo and a trip to the casino were some of Dee’s favorite social interactions where she met and made many friends over the years. Dee Dee planted herself in the middle of family pictures, so that she could be seen embracing everyone around her. She loved western movies and demanded silence unless she was critiquing the film. Dee will also be remembered for her love of High Hats, which she lived and breathed. Dee Dee’s love for hats was so strong she married a hatter. And if there ever was a person that believed cleanliness is next to Godliness it was Dee. Her home was immaculate upon the entrance of her white marble steps adorning her East Baltimore row home. Dee was proud and her presence in a room demanded attention. You had no choice but to take notice of her! Mr. Cliff and Dee found a love that only they could understand. Mr. Cliff wrote his wife love letters and she admired him as her husband and as a father to their children. They found joy in dressing up and they were determined to be the best dressed couple in the room. The world only knew Cliff and Dee as one, their union was an example of partnership and growth. Mr. Cliff preceded his wife in death on December 24, 2021. Dee accepted Jesus Christ at a young age. She joined United Baptist Church later in life where Dr. Solomon and the church family accepted her with open arms. Dee loved all people and never met a stranger. Dee acquired many friends over the years but her main “road dawgs” were her two nieces Colleen and Theresa. Those three always had one another’s back, and even in arguments they protected one another. A Time To Rest   Deirtra’s family will truly miss her and their hearts cannot fathom a life here on earth without her. They may be separated physically, but they will feel her presence in cherished memories and in their heart. Deirtra was a faithful woman and instilled that same strong faith in her loved ones. The family is comforted by knowing that they will one day be reunited with her just as she has reunited with loved ones who preceded her in death. Dee’s laughter and smile was contagious and her passing has left an empty place in the family. Our loss is Heaven’s gain and we believe one day she will hear her Savior say well done. Dee leaves to grieve her siblings Genevieve Young (Wade), Carol Jones, Dale Booth (Vanessa), Keith Booth (Yvette) and her sons Antonio Booth, Wallace Booth and Rahim Booth, Sr.(Eva) A host of grandchildren Davon Taylor, Daveny Booth, Daquane Booth, Latonya Turner, Ariel Booth, Ryheem Booth, Rysheid Booth, Wallace Booth, Stacey Booth, Angelina Booth, Nevaeh Booth, Kyle Booth, Edris Grate, Issia Grate, Rahim Booth, Jr., Ra-is Booth and Eiliyah Booth. A host of nieces, nephews, cousins and friends. Dee’s relatives are her legacy. Dee’s friends and neighbors will mourn her passing and remember the many ways Dee enhanced their families. In Dee’s words “Read my lips”. There will never be another Dee!

A Time To Live Deirtra &#8220;Dee Dee&#8221; Rahman was born in Baltimore, Maryland to the late James (JB) and Genevieve Booth on August 20, 1947. In addition to her parents, Dee Dee was preceded in death by her three siblings: James Henry,... View Obituary & Service Information

The family of Mrs. Deirtra Rahman created this Life Tributes page to make it easy to share your memories.

A Time To Live