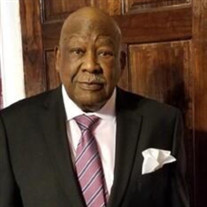 The Reverend Dr. David Nathaniel Lewis was born the second son of Richard Monroe Lewis and Fannie Mae (Sleter) Lewis on February 1, 1933 in Baltimore, Maryland. He attended public schools in Baltimore, Maryland and Portsmouth, Virginia until the age 17 where he graduated in 1951. He enlisted in the United States Coast Guard as a Seaman Recruit and that career culminated with the Reverend Dr. Lewis being a Boatswain’s Mate Chief Petty Officer. After an honorable service of over 20 years and having been stationed at Coast Guard bases in Portsmouth, VA; Cape May, NJ; New London, CT; Curtis Bay, MD and Rhodes, Greece, his training and experiences as a senior military non-commissioned officer had a profound impact on his life and those that surrounded him. After retiring from the Coast Guard and obtaining an Associates of Arts degree in Criminology in 1975 from The Community College of Baltimore, led a varied and unique life. His degree in Criminology opened many doors through work for the Supreme Court and Public Defenders Office of Baltimore as a Criminal Investigator, Police Officer (Suffolk, VA) in the undercover Narcotics Office, a Federal Police Officer at the National Security Agency in Fort Meade, MD and a Federal Police Commanding Officer in the Marine Gunboat Squadron, Kwajalein Island. He served as a state investigator for the Motor Vehicle Administration for 15 years, owned and operated three custodial businesses and a pork production farm in Isle of Wight County, Virginia for a few years prior to returning to Baltimore. He was an extraordinary entrepreneur and at the time of his death he was a residential property lessor. Throughout many endeavors, everyone knew where his true calling would eventually take him. “Big David” (as he was then called) would always vigorously make his points well into the night and early morning with debates amongst relatives over some interpretation or true meaning of a bible scripture. The Reverend Dr. Lewis was also a community activist and a vocal supporter of numerous social initiatives on behalf of the citizens of Baltimore. He was also a classically trained pianist with a gospel music repertoire that he first acquired from his mother Fannie Mae Lewis, an accomplished gospel pianist throughout the Hampton Roads area in the 1950s. After experiencing little fulfillment in his occupational ventures, David finally submitted to his true calling in 1983 by spreading the gospel of Jesus Christ. He was ordained in 1987 in Christendom where his thirst for Christ led him to The Wilbur H. Waters Theological Seminary where he received a BA in Divinity in 1991, a Masters degree in Divinity in 1992 and a Doctoral degree in 1994 from the Family Bible Seminary and College, state of Maryland. Rev Dr Lewis’ pastorships included 3 years as an assistant pastor at Wilbur H. Waters Theological Seminary, Assistant to the Pastor at Oxon Hill United Methodist Church and St. Mark United Methodist Church for one and three years, respectively and as Pastor at Cherry Hill United Methodist Church for five years until his retirement. David is preceded in death by his sister, Fannie; brother, Richard and sons Kirk and Diangelo. David leaves to cherish his loving wife of 16 years, Mrs. Natalie A. Lewis; son, Mr. David Nathaniel Lewis, Jr. (Gresha); daughter, Dr. Denise Key (Wilburt Sr.);  step-daughter, Shawn Hill (Frankie); brothers, Vernon Mason and Earl Lewis; sister-in-law, Eva Lewis; special friends, Randy Simmons and David Williams; 12 grandchildren, 19 great grandchildren and a host of close family, friends and business associates. In accordance with his final wishes, he will be cremated and his ashes will be deposited by the United States Coast Guard, in the Chesapeake Bay, where he participated in numerous life-saving operations at sea.

The family of Rev. Dr. David Nathaniel Lewis Sr. created this Life Tributes page to make it easy to share your memories.