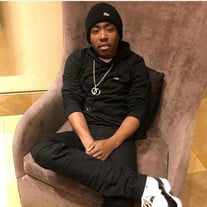 David "Man-Man'' James Lawson, Jr. was born December 21, 1991 to David James Lawson, Sr. and Sabrina S. Atkinson. David received his education through Baltimore City Public Schools. David, affectionately known as “Man-man”, started a career as a laborer with Arundel Masonary, Inc. He later became a mason tender and worked his way to a bricklayer apprenticeship, but had to discontinue because of medical reasons. Man-man was definitely a dapper dresser with a great eye for fashion. He loved wearing designer brands. He just loved looking good. He enjoyed playing games and showing his competitive side; while, talking trash and letting you know he will be winning. Man-man liked music. He loved rapping and freestyling for the family during social gatherings. He was also given the name, “Lil Bo-Pete”. He loved being around family and enjoyed being himself no matter what. He was truly the life of the party and could easily get the attention of a crowd without even trying. He was a natural comedian. He could say one thing and the entire room would burst into laughter. He enjoyed making people laugh. During the saddest and most painful times, you could count on him to make you laugh. He had an uplifting presence. You would just be happy whenever you saw his face. He was a protector and supporter of his family. You could rely on him to do what was asked of him, if you called. Whenever he was financially able, he took care of things without being asked. That's how he showed his love and appreciation to the ones who helped and supported him in his time of need. He had also stepped-in and helped raise his nieces and cousins when their fathers were absent.   Fatherhood to Man-man meant the world to him. Man-Man’s greatest joy was being the proud father of Ka’ron. He was honored to be Ka’ron’s dad and it made him feel extremely good. Ka’ron brought joy and peace into Man-man’s life.   Preceded him in death were his paternal grandparents: William Fred and Rosa Lee Calhoun; maternal grandfather: Phillip Derek Atkinson, Sr.; Uncles Marshal and Donnie Atkinson; and best friends, Big Twon and Rashaun (Dirty).   David leaves to cherish his memories: his son, Ka'ron Lawson; his parents: mother, Sabrina S. Atkinson and father, David James Lawson, Sr.; two Sisters: Rashida C. Shakir, Donna M. Hebron; two brothers: Darien M. Hebron, and James E. Lawson; six nieces: Any'ya and Arlin Alfred, Mila Frias, Delilah Hebron, Skylar Evans and Nylah Johnson; maternal Grandmother: Alice Kay Clifton; Aunts: (His favorite aunt and like his second mother) Gail M. Atkinson, Melinda, Ellen Marie Calhoun and Michelle (Ivan) Dixon-Bey; Great Aunts: Shirley (Willie) Battle, Patricia Atkinson, JoAnn Drake and Myrtle Love; Uncles: William "Fred" Calhoun Lawson, Michael Calhoun, Phillip Derek Atkinson, Thaddeus "Chuck" Clarke, Michael Gary Atkinson; Great Uncles: Larry and Antonio Atkinson; Stepsister: Ja'nee Brianna Clemons; Very close, loving cousins like-siblings: The Lesane sisters with his Bonnie (Bonnie & Clyde) Dionna D. Lesane known as “Dede” and Dameion “Snoop” Ray; Godmother Tabitha Harris-McElveen and God-brother and sister: Carlos and Ariel Harris; and a host of cousins, other relatives and friends.

The family of Mr. David James Lawson, Jr. created this Life Tributes page to make it easy to share your memories.