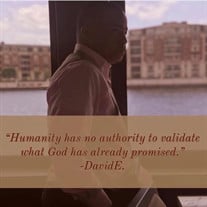 David Emanuel Carter was created and gifted to the world on October 13, 1993 in Baltimore, Maryland to mother Rosoletha V. Sympton (Andre) and Michael Fuller. David turned his "Royalty to a Reality" and accepted the second gift God gave him on Friday, July 31, 2020. It was then that he transitioned and settled into his new reality, royally. David E. Carter was nothing short of a rarity, though to call him that would be an understatement. David was an extraordinary gift, a gift that sometimes seemed unreal and almost unfair to have. If one had the pleasure to merely greet him with a simple hello, there was no doubt that although he was presently there, his spirit had about a 60 year head start. At a very young age, Mr. Carter was extremely advanced. Mature would be yet another tremendous understatement. He was well read, had traveled internationally, played the saxophone, and was an amazing scholar all throughout school. He was deeply involved in his community, and knew early on that he had the power to, and would, change the world. By the time David reached Mergenthaler High School with his signature trench coat, brief case, coffee mug, and loafers, he needed not say anything for his presence to be felt. He knew however, with every great man, comes great responsibility. His voice was needed. His intelligence, articulation, and undeniable wisdom was needed. Which is why he joined, and dominated the debate team and excelled in his Criminal Justice career path. He continued his education, studying at the Community College of Baltimore County. There, he took courses centered around Politcal Science. David was thirsty for knowledge, and always wanted to learn more. He was inquisitive and intellectually curious, all the while continuously teaching those around him. Early on, he made it his lifes duty to be a part of fixing a system so evidently broken. Those very important years of his adolescence were the foundation of a man people are honored to brag about today. It came as no surprise, that he was elected Most Likely to Succeed. Upon graduation, David was anxious to get in the field and straight to his chosen work. At the tender age of 22 he ran for City Council in his district, making him one of the youngest in the history of Baltimore to do so. Under the guidance of his mentor Al Sharpton, David joined the National Action Network (NAN)'s Baltimore Youth Chapter, being appointed President shortly after. He was also Vice President of the Millenial Coalition. He worked with countless Big Brother programs, gave numerous speeches, and made several appearances at the White House, meeting two sitting presidents. All this while still finding time to create and run his production and management company, Pharaoh Power Productions. David truly cared about the liberation of his people and the general betterment of others. He saw potential and greatness in everyone, even if they themselves werent aware of it. He created unions for workers at several jobs, continuously spoke at his alma mater, made sure to attend court dates, lead protests, and provide moral support for all of his peers. He was that one person everyone in life turned to when they needed help with any and everything, be it physical, spiritual, or emotional. He was the one friend, and for great reason, everyones parents adored and respected the most. What David accomplished in his very short 26 years here, most could never achieve in a lifetime. He understood just how precious life was, living by the quote Youre here for a good time, not a long time. His smile was infectious. His laugh, contagious. Just talking to him inspired you to work harder in life and push boundaries and to fight until the last second. Fear and failure were unknown to him. David dreamed big and gave 1000 percent in every single thing he did. He left no stone unturned, and gave nothing but unconditional love and unwavering loyalty to those closest to him. The footprint he left will transcend generations, and will be embedded in our memories, hearts, and souls forever. He will truly live through everyone he touched, and his memory will linger on with at minimum, a smile or a laugh. His speeches inspired even the most sorrowed person providing buoyancy and resilience. With a soulful voice that would bring you to your knees and tears to your eyes, Davids energy and vibration will echo throughout the world for eternity. There will NEVER be another David Emanuel Carter. There will never be another to even come close. He was a sacred gem loaned to us for the time he was needed; Gods divine order personified. Although physically he is now absent from the body, heaven and earth are now so much greater having his soul transcend both. David leaves his memory to be cherished with his mother Rosoletha V. Sympton (Andre), father Michael Fuller, two grandmothers, Mabel Fuller and Oletha Carter, six brothers, Andre Sympton Jr. (Kim), Darius Sympton, Deandre Sympton, Dominick Sympton, Caiden Fuller, Michael Fuller Jr. (Shanay), one sister, Mikah Fuller (Atlanta, Georgia), eight uncles, three preceded him in death, Cisco Carter, Cheyenne Carter (Linda), Tyrone Fuller, Rudolph V. Carter (Janice Toms River, NJ) Henry H. Clanton (Littleton, North Carolina), Curtis Fuller, William Fuller, Issaih Spriggs, one god mother, Carrieletia Welch, five god-children Ashton Briggs, Amaya Redman, Ava Cornish, Skylar Boone and Corey Gill Jr., four nephews Malyke, J’qwon, and K’avon Fuller Daniel Sympton, four nieces Ka’nya Fuller, Audrey Sympton, Kiara and Shania Springs, and a host of cousins and friends.

David Emanuel Carter was created and gifted to the world on October 13, 1993 in Baltimore, Maryland to mother Rosoletha V. Sympton (Andre) and Michael Fuller. David turned his "Royalty to a Reality" and accepted the second gift God gave... View Obituary & Service Information

The family of Mr. David Emmanuel Carter created this Life Tributes page to make it easy to share your memories.

David Emanuel Carter was created and gifted to the world on October...