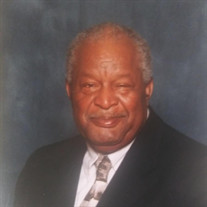 Daniel Edward Moore was born on May 1, 1932 to his parents William Jarvis and Naomi Mamie Moore in Pasquotank County, North Carolina. The oldest and last remaining of five children, Daniel left for heaven to be with the Lord Jesus Christ on September 24, 2020 around 4:33 p.m. from chronic heart failure. He attended Mill Pond grade school in Pasquotank County, North Carolina, where he received his High School diploma On February 9, 1954, he married Naomi Williams Moore (deceased), and from this union of more than 50 years of marriage was born six children: Celetha Xavier Williams Moore, Novella Denise Moore Matthews, Ramona Moore-Baker, Valory Moore Saboe, William Wayne Moore, and Danny E. Moore. In the 1950s, Daniel served in the United States Army. After his completion of military duty, he was hired by the Maryland Transit Administration where he worked as a bus driver, and later a supervisor for the Light Rail for more than 40 years until his retirement. He also worked for Westinghouse Corporation as a technician. Daniel was baptized at Mt. Carmel Baptist Church in Pasquotank County, North Carolina, where he was a faithful member and a Sunday School teacher. He later joined Mt. Ararat Baptist Church in Baltimore, Maryland where he served as a faithful member until his passing. “Daddy”, “Pops”, and Granddaddy, as he was lovingly called by his children and grandchildren, loved to hang out in his garages—collecting and acquiring “collectables” and taking inventory of each and every item in each garage. If there was something we needed, Daniel would say “Why spend good money? Go look in the garages!” When you asked Daniel how he was doing, he would respond “I’m holding on”. When we came to visit and asked, “What’s happening?” his response was, “Ain’t no happenings!” Daniel loved the heat. When the weather would be 80 degrees indoors, Daddy would indicate he was cold and have us crank up the heat. He enjoyed visiting his family and friends who were ill to bring comfort to them. He enjoyed attending the MTA affairs and reconnecting with his colleagues. Daniel was a leader and inspiration for his children, especially his grandchildren. He provided them with a broad scope of growth and learning opportunities including entrepreneurship, sports, and mechanics. His grandchildren proudly reflect his lessons in their daily lives. Daniel loved his family and worked very hard to provide for them. He has left his legacy to his surviving 6 children; 3 grandsons: Nicholas Emmanuel Frazier, Jordan Marcus Matthews, and Jarren Malcolm Matthews; 3 great-grandchildren: Ethan Nicholas Frazier, Marley Rose Matthews, and Willow Naomi Matthews; a son-in-law: Jon Saboe; 3 daughter-in-laws: Sarah Moore, Rochelle Ann Moore, and Helen Moore; 2 granddaughter-in-laws: Adongo Tia-Okwee Matthews, and Michelle Renee Frazier. Daniel also has two surviving sister-in-laws: Ruth Jacobs of Bronx, New York, and Doretha Turner of Hampton, Virginia. In addition, there is a host of nephews, nieces, cousins, along with friends and neighbors of the 3100 block of Sequoia Avenue, Baltimore Maryland.

Daniel Edward Moore was born on May 1, 1932 to his parents William Jarvis and Naomi Mamie Moore in Pasquotank County, North Carolina. The oldest and last remaining of five children, Daniel left for heaven to be with the Lord Jesus Christ on... View Obituary & Service Information

The family of Mr. Daniel Edward Moore, created this Life Tributes page to make it easy to share your memories.