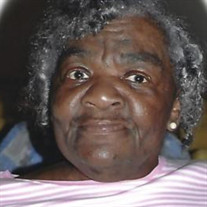 Few can say that they don’t remember meeting Daisy Gladys Jones. On the contrary, even a chance meeting with Daisy left an indelible mark in one’s memory. She was a gallant lady who didn’t mind sharing her advice with everyone. Whether they asked for it or not……. Daisy Gladys Heidelberg Jones, daughter of the late Chris Heidelberg and Carrie Mae Rogers (both deceased) was born June 24,1943 in Manhattan, New York. She was one of nine siblings. Like many East Baltimore residents before her, Daisy joined the ranks of former Poets when she completed her education in Baltimore City Public School System….. graduating from Dunbar High School. She then met and married Cornell Jones Sr, who preceded her in death. From this union seven children were born. For much of her married life, Daisy was a homemaker focused on rearing and providing for her children. At home she was a stern disciplinarian, that never “spared the rod”, and she kept her children close. She also provided daycare for others in her home. After her children finished elementary school, Daisy returned to the workforce employed in numerous roles. Although she worked various jobs throughout her life, Daisy discovered that her passion was caring for elderly, ailing and disabled patients as an in-home provider. To know our mother, Daisy was to love her. She was compassionate, kind and caring, but she was also candid, straightforward, and honest to the core. Indeed, Daisy was never at a loss for words. If she liked you, she told you so; Likewise, if she did not care for you, she definitely told you so. If she called you friend, you were considered a friend for life. She was very particular and selective about the order and handling of everything. Daisy always enjoyed having a good time with her family and friends in the community. In her latter years, she enjoyed mobility trips to the store to shop and eating at restaurant venues with her son Cornell Jr. (better known as Buck) and friends. She also appreciated and loved visits with her brother Chris, talks with her girlfriends and most of all watching nostalgic tv and movies. Although Daisy was baptized as a youth, she recommitted her life to The Kingdom by becoming a member of New Christian Memorial Church. She truly enjoyed bible study, Sunday services and her new church family. On September 11th, 2020, Daisy’s health began to decline when she suffered an acute stroke that permanently changed her mobility and lifestyle. Over the next nine months, she would endure many health challenges; Nevertheless, she remained true to her own character and personality. On Saturday, May 29th, God called for Daisy Gladys Jones, and she answered. She will truly be missed by all who knew and loved her. Daisy was preceded in death by Children: Juliet Jones & Cornell Jones Jr.; Grandsons: William Rogers Jones and Herbert Uzzell; Siblings: James Heidelberg, Ruthie Heidelberg, Lillie Mae Heidelberg McCoy and Herman Rogers. A beloved older cousin, with whom she shared a remarkable relationship and revered as a surrogate ‘Mom’, Ruth Jones. Daisy leaves to mourn her passing…… Daughters; Cornella Thompson, Ruth Uzzell, Charlena Jones, Sheree Lang, and Daisy Jones, Son-in-laws Mark Lang and Larry Thompson; Grandchildren: Darnell, Dana, Cheree, Denard, Shenae, Gidgette, Larry, Tiffany, Shekia, Shawnta, Justin, and Darius; Great-Grands DJ, Rache, Kayla, Reese, Skylar, Curtis, Cirsten, Haley, Zoe, Aniyah, Jordyn, Darrien, Dalia, Daisha, Destiny, Khalil, Avery, and Kymonne; Great-great Grand Raine; Siblings: Carrie M. Goines, Chris Anthony Heidelberg, Gwendolyn Cook and Balam King; One Brother In Law: Steve Cook; Godson: Jabari Hall; a host of nieces, nephews, family, and good friends.

Few can say that they don&#8217;t remember meeting Daisy Gladys Jones. On the contrary, even a chance meeting with Daisy left an indelible mark in one&#8217;s memory. She was a gallant lady who didn&#8217;t mind sharing her advice with everyone.... View Obituary & Service Information

The family of Ms. Daisy Gladys Jones, created this Life Tributes page to make it easy to share your memories.