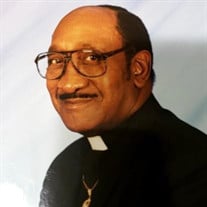 PASTOR-EMERITUS CHARLIE ERVIN GOODE, the son of the late Sallie (Barksdale) Goode and Ernest Goode, Sr. He was born June 12, 1926 in Halifax County, Virginia. On January 11, 2021, at 4:28 p.m., at Genesis-Catonsville Commons, he went home to be with the Lord. He was the youngest son of eight children, five of whom preceded him in death. He accepted Christ at an early age and was a member of White Oak Baptist Church, Goode’s Way, South Boston, Virginia. He was a hard worker in his early years. He married the former Ruby Anderson February 1945. They were blessed to have four girls, Ilean Goode McCrea-Roberts (who preceded him indeath), Josephine Goode-Evans, Naomi Goode, and Angela Goode. They later moved to Baltimore where he worked many jobs to provide for his family. He was known for always working two jobs at a time. After moving to Baltimore, he joined Jones Tabernacle Baptist Church in 1960. While at Jones, he was called into the ministry and received his ministerial license on April 16, 1967. Reverend Goode served as a Missionary Evangelist from 1967 – 1974. He was a member of Jones for 14 years before transferring to Zion Hill Missionary Baptist Church in 1974 where Reverend James Wilkens was pastor. Reverend Wilkens appointed Reverend Goode as his Assistant Pastor in 1977. Reverend Goode served as Assistant Pastor for 13 years. Upon Reverend Wilkens retirement, Reverend Goode was ordained March 28, 1990 and appointed Pastor of Zion Hill Missionary Baptist Church on March 30, 1990 by Reverend Wilkens and the congregation He served faithfully as Pastor until he retired March 2006. As mentioned earlier, Reverend Goode was a hard worker. He worked many, many jobs as well as owning his own business, Goode Landscaping. He would often seek the assistance of his grandsons, Eric and Derrick. He was good at making his client’s yards look beautiful. In his later years, he worked at Good Samaritan Hospital and Gill-Simpson Electrical Company, both of which he retired from. In his later years, he met and married Jackie(Jacqueline Pope). They were married twenty-four wonderful years. They were best friends. Charlie had a way of making her laugh and she had a way of making him happy. They would take vacations almost every year. Many years they would travel to Virginia in August to attend Reverend Goode’s family reunions with his sisters and travel to Josephine’s house in Missouri in September. Charlie took his first plane trip and his first boat cruise with his wife Jackie. He would travel with Jackie on her business trips to other cities. These memories will be cherished forever. Pastor Goode loved his family. Praying for his family is one of his many joys. Charlie looked forward to hearing their voices on the phone and the ZOOM meetings. He also loved his dog Nino. While on the ZOOM meetings, he would always ask, “where is Nino”? Pastor Goode leaves to cherish his memories: his wife, Jacqueline Goode, four daughters, Josephine Goode-Evans (Clayton), (Chesterfield, Missouri); Naomi Goode (Baltimore, MD); Angela Goode (Baltimore, MD); Dianne Barber (Brooklyn, New York); four grandchildren, Eric McCrea (Trina), Derrick McCrea (Pennsylvania), Brian Wilkerson, and Dejuan Shropshire (Mark); seven great-grandchildren, Ashley McCrea, Destanie Wilkerson-Gaddy, Stephen and Mykal McCray, Mark Shropshire Jr., Kamryn Wilkerson, and Braxton Daily; 3 surviving sisters, Geneva Monakey, (Brooklyn NY), Hattie Scott, (Jamaica Queens, NY); Rosetta Soogea, (Atlanta,Georgia). 3 stepchildren, Darvun Carter (Evelyn), Chaweng Carter (Greta), Lisa Carter -Evans (Donald) and a host of other family members and love ones, whose hearts and souls he has touched forever.

PASTOR-EMERITUS CHARLIE ERVIN GOODE, the son of the late Sallie (Barksdale) Goode and Ernest Goode, Sr. He was born June 12, 1926 in Halifax County, Virginia. On January 11, 2021, at 4:28 p.m., at Genesis-Catonsville Commons, he went home to... View Obituary & Service Information

The family of Rev. Charlie Ervin Goode, created this Life Tributes page to make it easy to share your memories.

PASTOR-EMERITUS CHARLIE ERVIN GOODE, the son of the late Sallie...