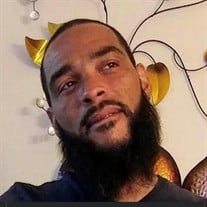 Charles F. Rheubottom Jr., born December 16, 1980 to Darlene Ennis and Charles F. Rheubottom, Sr. He suddenly departed this life on March 9, 2022. Charles who was referred to as “Reds or Wildout” was educated in Baltimore City Public School System he was recently attending CCBC to get his GED. He also worked as a commercial landscaper. Charles was raised under the Apostolic Pentecostal Faith Church of God in Christ while growing up. He also attended the Minor Tabernacle Church of God in Christ under the leadership of his grandmother and grandfather, Mother Eseline Minor and Superintendent Aubrey Minor. Charles soon became a Muslim in his adult years of 2019. Charles was a happy fun loving guy who was pleasant to be around at any time of the day. He would just about help anybody in need from moving furniture from one house to another to cleaning in your house that just was Charles. Anyone that knows Charles, knows that he likes to dress, look good and he always carried his radio around because he loved his music. He also loved to dance. Charles really tried to stay on the straight and narrow while growing up in this rough world as a young man. Charles wasn’t perfect but he was just himself. Charles will be truly missed by his mother, siblings, aunts, cousins, nieces, nephews and friends. Charles leaves to cherish his memories mother, Darlene Ennis; stepfather, Shawn Kidwell Sr.; two sisters, Nina Rheubottom, Nika Harris; two brothers, Timothy Harris, Shawn Kidwell Jr.; one daughter, Aaliaya Harris; one son Demetrius Stewart; two grandchildren, Neveah Diabate and Reign Stewart; one godmother, Connie Tolbert, two grandmothers Alberta Harris and Lillian Jones, two aunts, Barbara Rheubottom and Goldie  Lester, two uncles Anthony Rheubottom and Paul Williams, Jr.; girlfriend Pebble Holland and a host of cousins, nephews, nieces, and friends.

Charles F. Rheubottom Jr., born December 16, 1980 to Darlene Ennis and Charles F. Rheubottom, Sr. He suddenly departed this life on March 9, 2022. Charles who was referred to as &#8220;Reds or Wildout&#8221; was educated in Baltimore... View Obituary & Service Information

The family of Mr. Charles Frankies Rheubottom, Jr. created this Life Tributes page to make it easy to share your memories.