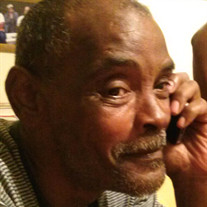 “For god so loved the world that he gave his one and only son, that whoever believes in him shall not perish, but have eternal life.” John 3:16 Charles Burnell Chance, affectionately known as, “Bo” by his family and friends, was born on July 4,1956 in Dunn, North Carolina to the late Collins and Mary Jane Chance. On June 15,2022 God called him home to rest eternally. Bo attended the public schools in Harnett County, North Carolina. After which he moved to Baltimore, Maryland. Charles worked several jobs including Daniel Schuster Concrete Company in Owings Mills, Maryland as a construction worker. During his later years, Bo did home improvement work until his health began to fail. Bo enjoyed r&b music especially “Always and Forever” by the Heatwave. He enjoyed telling jokes and making others laugh. But most importantly he loved his family and had a strong belief in God. Charles “Bo” leaves to cherish his memory: A wife, Thelma Diane Chance, 3 daughters Dierra Chance and Chasity Dorsey (Baltimore, MD) and Britne Dula (Washington D.C.) 1 step daughter Debin Shrieves (Pasadena, MD) 1 sister Willa Mccoy (Dunn, NC) 3 sister in laws Gladys Wharton, Vi Vincent, Ann Dee (Baltimore, MD) 6 grandchildren, 2 step grandchildren, and a host of many nephews, nieces, great nieces and nephews, cousins, and friends.

The family of Mr. Charles Burnell Chance created this Life Tributes page to make it easy to share your memories.

“For god so loved the world that he gave his one and only son,...