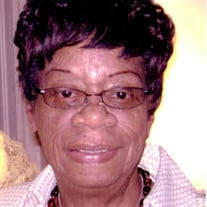 Celestine Amelia Martin– Nickens was the daughter of the late Pauline and John Martin. She was born March 20, 1935 at the University Hospital of Baltimore, Maryland. She departed this life on July 19, 2020 after a sudden health crisis. Celestine was educated in the Baltimore City Public School System. She received formal training in the medical field at an early age and was employed as a Nursing Assistant at the Lutheran Hospital; Levindale and Dukeland Nursing Homes. Celestine met and married Samuel Nickens Sr. and from that union were born four children. Celestine was proud to work under the management of her son, Samuel Jr, along with her daughter, Denise Nickens, at the Random House Book Company. They made a great team. In 2012, Celestine joined the Mount Lebanon Baptist Church, where she enjoyed seeing her granddaughter, Santressa, participate in liturgical dance. Her favorite hymn was “Precious Lord Take My Hand”. Celestine was a great homemaker. She was known for baking the best cakes in town She enjoyed barbeques, doing hair, and helping others in her neighborhood; especially the neighborhood kids. She had a great love for animals; she even provided a home for stray cats. Celestine was a mother, sister, grandmother, aunt, friend, and much more to those who knew and loved her. Celestine was proceeded in death by her husband; Samuel Nickens Sr, and her brother John Albert Martin Sr. She leaves to cherish her memory her eldest sister; Dolores McWilliams, three daughters; Delores Nickens-Booth, son in law; Leonard Booth, Denise Nickens, Stacey Nickens, one son; Samuel Nickens Jr.; four grandchildren; Lovell Mills, Tierra Booth, Ciara Smith, and Santreasa Nickens, five great grandchildren; Lovell Williams, Tasia Williams, Ka’den Samuel, Kendell Johnson, Kenlee Johnson, and a host of nieces, nephews, and cousins.

Celestine Amelia Martin&#8211; Nickens was the daughter of the late Pauline and John Martin. She was born March 20, 1935 at the University Hospital of Baltimore, Maryland. She departed this life on July 19, 2020 after a sudden health crisis. Celestine... View Obituary & Service Information

The family of Mrs. Celestine Amelia Nickens created this Life Tributes page to make it easy to share your memories.

Celestine Amelia Martin– Nickens was the daughter of the late...