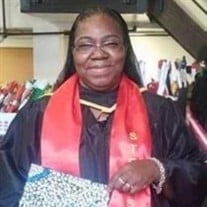 Cassandra Renee Vaughn (Hargrove) was born May 29th, 1964 in Bedstuy, New York to Lucy Vaughn and the late Elijah Jones. After giving birth to her two beloved sons Mark Anthony and Dannie Lee, she graduated from New York Public Schools with her GED.  After giving birth to her daughter, Chrissandra, she married and moved to Baltimore where she later continued her education, ultimately receiving her Associates degree in Cyber Security at Baltimore City Community College. A die hard Ravens fan, she enjoyed a nightly glass of wine as she cheered them on from her favorite lounge chair.  Cassandra was known for being silly, loving to pull pranks on friends and family members a lot. She was a powerful, wise woman and a mother figure to all who were blessed enough to cross her path. She exemplified grace and class, forgiveness and peace.  She leaves behind a mother, Lucy Vaughn; four brothers, Brian (Linda), Richard (Petra), Mark (Wonder) and David; two sisters, Nicole and Brenda; three sons Mark (Asiyah), Dannie, and Eric; a beloved daughter, Chrissandra (Darrington); five grandsons, Musa, Ayyub, Hamza, Ny’on and Darrington Jr.; one grand daughter, Sahabiyyah; as well as a host of other nieces, nephews, cousins, and friends.

The family of Ms. Cassandra Renee Hargrove created this Life Tributes page to make it easy to share your memories.