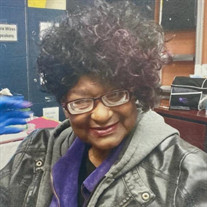 Carolyn Juanita Smith Morris born in Richmond, Virginia to the late John Jackson Sr. and Laura Smith Jackson on October 16, 1946. She was educated in the Richmond School System and worked as a Presser until she moved to Baltimore, Maryland where she met and married Milton Morris who preceded her in death. In 1986 Carolyn became a part of the Antioch Shelter Home and Senior Establishments family were for a few years she helped to manage one of the senior homes as well as volunteered at the shelter answering phones and helping out wherever she could. Carolyn soon became friends with the Founder and CEO, Pastor Joyce Galloway and years later became a member of her church, Antioch Community Church of God, now known as Antioch Ever Increasing Faith International Church where she renewed her relationship with our Lord and Savior Jesus Christ. In the early 2000’s Carolyn began facing physical and mental challenges in her life, and needed assistance. She received that assistance from Pastor Galloway and her Antioch Church Family where she lived in two of the senior homes, and eventually Pastor Galloway took Carolyn into her own personal home where she lived out her life. Carolyn was the Diva in the house, the glamorous one. Don’t touch her red lipstick. Carolyn was enrolled in the Raven’s Adult daycare for several years then Creative Alternatives where Mr. Prince was her caseworker, a person she adored who helped keep her in check (smile) and enrolled her in the Johns Hopkins Elder Plus program where she enjoyed participating with other seniors and making friend. Carolyn is preceded in death by her father John Jackson Sr., mother Laura Smith Jackson, her sister Rachel Jackson and her husband Milton Morris. Carolyn is survived by her 2 brothers John Jackson Jr, Aubrey Jackson, her sister, Judith Jackson, aunts, uncles, nieces, nephews, many cousins and her church family especially Pastor Galloway, Shawn, Danita and Vicky and a host of others.

Carolyn Juanita Smith Morris born in Richmond, Virginia to the late John Jackson Sr. and Laura Smith Jackson on October 16, 1946. She was educated in the Richmond School System and worked as a Presser until she moved to Baltimore, Maryland... View Obituary & Service Information

The family of Ms. Carolyn J. Morris created this Life Tributes page to make it easy to share your memories.

Carolyn Juanita Smith Morris born in Richmond, Virginia to the...