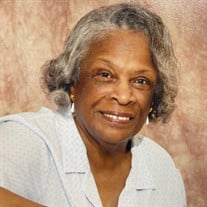 After a short illness, Mrs. Carol H. Wiggins,daughter of the late Mr. James W. Hall and Mrs. Carrie Thompson Hall was called to be with the Lord on October 31, 2020. Carol was born and raised in East Towson of Baltimore County, Maryland. She was the oldest of two children. Francis Hall Hadley her sister preceded her in death. Carol attended Carver Elementary School and later Carver High School in Towson. After the birth of her son Ronnie, Carol completed her education at Douglas High Evening School in Baltimore City in 1948. In 1951, Carol joined her beloved St. James A.U.M.P. church where she served on the Usher Board, Trustee Board, and Senior Choir. She also worked on the committee responsible for beautifying the church. Carol became a dedicated employee of the C & P Telephone Company (later renamed Verizon) in 1953, as a clerk in the Comptroller Dept. In 1985, while working for the company, Carol received recognition and an award for saving the life of a co-worker who was choking on a piece of food. The recognition was featured in the C & P Message Register. In 1991 Carol retired from Verizon. Having met the love of her life, Mr. James N. Wiggins (Wiggi), she got married in 1952. Carol was a compassionate and dignified person. Her knowledge of family and East Towson history was phenomenal. She was very loyal to family and friends. Always available to serve, help and give. Carol loved to travel, visit casinos, eat out, attend church and church activities, and to be with her family, but most of all, Carol loved to talk about the goodness of the Lord. Carol H. Wiggins leaves to mourn: her son James Ronnie Hall (Blanche Hall);granddaughters Tonya Gross and Keona W. Hall; great-grand sons: Devin, Shae, Troy, Koron, and Kyron; four great-great grandchildren; her dedicated niece Jacqueline Hadley; Uncle Kenneth Thompson (Dale Thompson); aunts: Janice Roberts, Lilian Burnett; Cousin Ruth Hall; a devoted friend Anne Childers, Sherri, Brianna, Sierra and a host of relatives and friends.

After a short illness, Mrs. Carol H. Wiggins,daughter of the late Mr. James W. Hall and Mrs. Carrie Thompson Hall was called to be with the Lord on October 31, 2020. Carol was born and raised in East Towson of Baltimore County, Maryland.... View Obituary & Service Information

The family of Carol Hall Wiggins, created this Life Tributes page to make it easy to share your memories.

After a short illness, Mrs. Carol H. Wiggins,daughter of the...