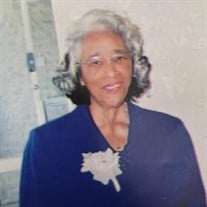 “I have fought the fight, I have finished the race, I have kept the faith. Now there is in store for me the crown of righteousness…” II Timothy 4: 7-8 Our beloved Betty Alfrieda Matthews Shelton, the second of three daughters of the late Alice Redd Matthews and Mayon M. Matthews, was born on October 7, 1928 in Baltimore, MD. On January 12, 2022, Betty was touched gently by an angel and quietly lead into the Heavenly realm of eternal rest leaving a wealth of fond memories and God’s blessings. Betty was educated in the Baltimore City Public Schools (BCPS) system having graduated from Benjamin Banneker Elementary School in 1939. She attended Dunbar High School (through 11th grade) and received her high school diploma from Douglass High School in 1945. Betty matriculated at Coppin State Teacher’s College (now Coppin State University) graduating in 1949 with a Bachelor’s degree in Elementary Education. Following her graduation from Coppin, Betty’s first teaching position was at Benjamin Banneker – the same elementary school she previously attended as a young child. Betty furthered her education and earned a Master’s degree in Early Childhood Education from New York University in 1954. Additionally, Betty completed post graduate professional courses at Johns Hopkins University (Early Childhood Education, 1972-1974) and George Washington University (Administration and Supervision, 1975-1977). Employed with the BCPS for more than 30 years, Betty was an advocate for education. During her tenure with BCPS, she held various positions including teacher, senior teacher, master teacher, assistant to the principle and vice principal. Education was her passion; her ability to understand and communicate with young people made her job more pleasure than work. She described herself as “a teacher who took your hand, opened your mind, and touched your heart”. Betty accepted Christ at an early age and in 1939 she was baptized by the late Arthur J. Payne at the Enon Baptist Church. As a member of Enon for 83 years, Betty was totally involved in the life and work of the church. She chaired and was active with many church wide committees and organizations including Sunday Church School, Bible Study, Bettie Redd Mother’s Club, Board of Christian Education, Deaconess Ministry, New Essene Guild, A.J. Payne Circle, and the Alzheimer’s Support Group. Betty served as Enon’s Director of Christian Education for five years during which time she restructured the Board of Christian Education and created many Christian Education programs and projects. For many years, Betty was also a highly respected advisor and mentor for the youth and young adults of the church. She was extremely proud of her efforts as Coordinator of Enon‘s History Archives Room, collecting various unique artifacts and memorabilia capturing the rich history of the church. In addition to her love and passion for education and her church, Betty loved her soulmate Wilfred T. Shelton, Sr. whom she met at Enon Baptist Church. Betty stated that on the day they met, “Shel”, as she fondly called him, declared that he was going to marry her….and true to his word, they were married on December 30, 1951 and shared a long, loving and happy relationship for 52 years. Betty and Shel loved to travel, visiting most states in the United States and numerous locations outside of the U.S. including Florence, Stresa, Venice and Rome, Italy in 1975 to celebrate Shel’s retirement. Betty’s hobbies included scrabble, pinochle, photography, entertaining and traveling. Known for her selflessness, her kind and caring nature, Betty will be remembered for her generosity toward family, friends, strangers, church, and charities. Betty was a tool God used to fulfill His purpose and she dedicated her life to serving others. Betty was preceded in death by her husband, Wilfred F. Shelton, Sr., her two sisters, Anne Matthews Warner and Alice Berteal Matthews, daughter Marjorie Shelton Spellman, brotherin-law Earl Warner, Jr. and son-in-law Donald Spellman, Sr. Betty leaves to mourn their loss and cherish her memory: son Wilfred F. Shelton, Jr. (Aida), one niece Marthann Warner Davis (Charles); one nephew Richard Edward Evans (Nick); grandchildren: Donald Spellman, Jr. (Carla), Wanda Spellman Goodwin (David), Andre Shelton (Lizette) and Fernando Shelton; great grandchildren: Brendon Shelton, Sheldon Spellman and Ashton Shelton; great nephews; Jonathan Davis and Kevin Davis; godchildren: Pamela Donaldson, Alexis Thompson, Vicki Brown and Kevin Davis and a host of nieces, nephews, cousins, devoted friends and church members. “Others Lord, yes others, let this my motto be; help me to live for others, that I may live better for thee.” (Composed by Betty M. Shelton) Lovingly Submitted, The Family

&#8220;I have fought the fight, I have finished the race, I have kept the faith. Now there is in store for me the crown of righteousness&#8230;&#8221; II Timothy 4: 7-8 Our beloved Betty Alfrieda Matthews Shelton, the second of three daughters... View Obituary & Service Information

The family of Mrs. Betty Matthews Shelton, created this Life Tributes page to make it easy to share your memories.

“I have fought the fight, I have finished the race, I have kept...