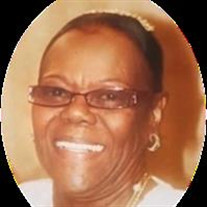 BERNICE TARVER was born on December 27, 1937 to the late Maude and Jesse Willingham Sr. She was the second of five children. She departed this life suddenly on May 4, 2021. Bernice grew up in Baltimore, MD and she completed her early education in Baltimore City Public Schools. She graduated high school from Frederick Douglas in 1957 and later attended Cortez Peters School for administrative studies. She then married Eddie Tarver, III on December 7, 1958. Through that union they were blessed to raise four beautiful children. Bernice was a devoted Jehovah’s Witness since 1970. She faithfully attended weekly meetings and invited others to attend the yearly “Memorial of Christ’s Death” as well. Bernice owned several dry cleaning businesses and later opened a private daycare center where she raised villages. Affectionately known by many as Aunt Bunny, she was equal parts loving, nurturing, humble, stern, and wise. Bernice was the matriarch of the Tarver family and a mother to all that knew her. She gave respect to everyone with whom she interacted and demanded the same respect in return, though she had such a strong presence, she never needed to verbalize this demand to others – if you ever interacted with Aunt Bunny you just knew. Bernice was an extraordinarily devoted wife, mother, grandmother, sister, and friend. She genuinely and unconditionally loved the people in her life, took great care of all those with whom she came into contact, and had a special place in her heart for all of her (self-proclaimed) “children” and “babies.” An anonymous source once stated: “One of the best feelings in the world is knowing your presence and absence both mean something to someone.”  Suffice to say, Bernice’s presence and absence both meant something to everyone she connected with over the years. Bernice was deeply loved and all who knew her will truly miss her. Bernice’s parents, Maude and Jesse Willingham, Sr.; three siblings Jesse Willingham, Jr., Frank Willingham, and Nathaniel Willingham; a son Damon (Jolanda) Tarver, Sr.; two grandchildren Sheldon Anderson and Tanja Shields; and a great-grandchild Khalil Wyche preceded her in death. As she awaits paradise with her parents, siblings, son, grandchildren, and great-grandson, Bernice leaves loving memories to be cherished by her husband, Eddie Tarver, III of sixty-two years; her brother, Otto Willingham; children, Renée Rivers, Tangy (Erroll) Ellis, and Eddie Tarver, IV; her grandchildren, Glenda Rivers-Flowers, LaTasha Tarver, Glenn Rivers, Jr., LeCreshia Knight, Chardae Tarver, Antrovone Pappillion, Anterrio Tarver, Robyne Rivers, Portasheka Tarver, Chasity Tarver, Damon Tarver, Jr., and Robert Tarver; 25 great-grandchildren; five sisters and bothers-in-law; and a host of nieces and nephews as well as many other relatives and friends.

BERNICE TARVER was born on December 27, 1937 to the late Maude and Jesse Willingham Sr. She was the second of five children. She departed this life suddenly on May 4, 2021. Bernice grew up in Baltimore, MD and she completed her early education... View Obituary & Service Information

The family of Mrs. Bernice Tarver, created this Life Tributes page to make it easy to share your memories.