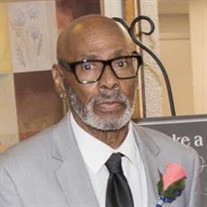 Bennett Lee Perry, affectionately known as “Benny” was born to Nellie Durham in Harrisburg, Pennsylvania on June 12, 1944. After a gradual decline in health, Bennett departed this life on October 19, 2020 at Season’s Hospice in Baltimore, MD. After high school, Bennett enrolled in the Army where he was originally stationed at Fort Gordon, Georgia. Bennett went on to earn several medals including the National Defense Service Medal, Armed Forces Expeditionary Medal, and a Good Conduct Medal for his service in Korea. After his time in the service, Bennett met and married Gwendell and from that union came a son, Bryan. He later met and married Deborah and from that union came another son, Devan. Bennett went on to further his career as a steelworker at Bethlehem Steel in Baltimore, MD. Unfortunately, an injury cut his time in the field short. Bennett did not let the injury deter him. He still made the best of his circumstances and chose to spend his time loving those near and dear to him. This was evident when you would see him with his special lady, Sharon Hardin. Bennett spent a great amount of time helping to raise his grand-daughter and adopted nieces and nephews earning the nickname “Uncle Benny”, as many in the neighborhood would call him. He was loved by many and will truly be missed. Bennett leaves to cherish his memories, sons Bryan and Devan (Patrice), daughter Kimberly, grand-daughter Devynn, grand-son Bradyn, fiancé Sharon Hardin, and a host of family and friends.

The family of Mr. Bennett Lee Perry created this Life Tributes page to make it easy to share your memories.

Bennett Lee Perry, affectionately known as “Benny” was born to...