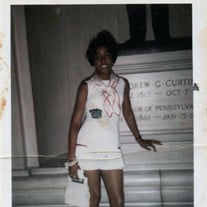 Audrey Jean Singletary, daughter of the late Julius Astor Jones and Elsie V. Jones, was born in Franklin County ,Virginia in 1946. She departed this life on August 15, 2020 from a brief illness. From an early age, Audrey was known as Bobbie. Bobbie was educated in the Franklin County Virginia and Baltimore Maryland school systems. Bobbie confessed Christ as her personal Savior at a young age and was a member of Temple Baptist Church. In February of 1966, Bobbie was married to the late Nelson Singletary. Through their union the Lord blessed them with three children; Darryl Singletary, Terrell Singletary, and Cosette R. Singletary. Nelson preceded her in death in 1975. Fortunately, Bobbie had a second chance at love and met the love of her life, David Lipscomb. They went on to have one daughter; Dayna Lipscomb. Bobbie and David remained together until his death in March of 2000. Bobbie was always at service to others. She worked with her life partner for many years as a bookkeeper for his company, Royal Cab Company. She then spent several years caring for her grandchildren before she decided to return to the work force. She spent the last five years of her life working at Future Care -Cold Spring Nursing home, where she leaves a lasting imprint on the lives she touched and will be sorely missed. Bobbie was quiet and soft -spoken and greeted everyone with a warm heart and a friendly smile. She especially loved her family and friends and enjoyed spending time with them doing one of her favorite things; gambling. She appreciated a good game of poker with friends, bus trips to Atlantic City with her sister, and excursions to Las Vegas with her mother.In God's heavenly kingdom Bobbie now joins loved ones that preceded her in death; parents; Julius and Elsie Jones, three brothers; John M. Jones, Julius A. Jones Jr., ex -husband; Nelson Singletary and devoted partner; Davis F. Lipscomb. Audrey leaves to mourn, her son; Darryl; her daughters; Terrell, Cosette, and Dayna; seven grandchildren; Tavon Singletary, Darryl A. Singletary, Shareena T. Verrett, George S. Verrett 3rd, Eric L. Keller Jr. Jordan B. Keller, Daysha S. Haskins; eight great grandchildren; sister; Dorothy Johnson, Aunt; Inez, Louise Gilchrist from Philadelphia, and a host of nieces, nephews, and friends.

Audrey Jean Singletary, daughter of the late Julius Astor Jones and Elsie V. Jones, was born in Franklin County ,Virginia in 1946. She departed this life on August 15, 2020 from a brief illness. From an early age, Audrey was known as Bobbie.... View Obituary & Service Information

The family of Ms. Audrey Jean Singletary, created this Life Tributes page to make it easy to share your memories.