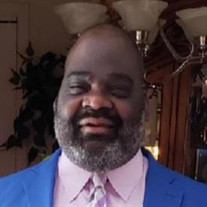 ANTHONY STEWARD, the son of Barbara Hawkins (Stepfather Joseph Hawkins) and James Henderson of Aberdeen, Maryland; was born on January 28, 1969 at Johns Hopkins Hospital and raised in Aberdeen, Maryland. He departed this life on January 31, 2021. Anthony received his education and Graduated from John Archer school in Bel Air, MD. He was a member of Evangelistic Church of Deliverance under the past leadership of Pastor Patricia Pringle- (Bishop Kenneth Johnson). Anthony loved church and listening to Gospel music. Anthony was a collector of things he loved, Pennies, Keys, and Jewelry. He loved his guitar and cd's, his favorite color is Purple, and he loved the Baltimore Ravens. He loved his family and would not let nothing go wrong with his baby nieces and nephews. Anthony loved family gatherings, he would cut up and dance and have a good time while telling you just what was on his mind. He Loved his mother to no end and would sit with her and do all he could to make sure she was ok. If she were upset, you could hear him say "HEY YOU BETTER LEAVE HER ALONE!" The Doctors told his mother that Anthony would not live past the age of two, But God blessed us all with 52 years with him. As an adult with disabilities, he lived in Baltimore and worked at the Greenery in White Marsh, MD. Anthony and his Aunt Bobby-Jo shared a special bond. They laughed, danced, and protected each other. When they seen each other Bobby -Jo would say THAT’S MY NEPHEW and Anthony would say “YUP THAT’S RIGHT- YOU BETTER BELIEVE IT! Anthony was preceded in death by his maternal grandfather Johnny Jones, paternal grandmother Ms. Margie Henderson two brothers Sherman Hicks and Maurice Stokes, Aunt Ruth Jones, and Uncle Earnest Jones. Anthony also leaves to cherish his memory: Grandmother Audrey Simpson, Siblings; Clara Haynes (1 daughter, 2 grandchildren), Marvin Croxsell Jr., Lola Watkins (Garfield Watkins, 6 children, 14 grandchildren, Denise Epps (two children, 9 grandchildren), Delores Cromwell (3 children 4 grandchildren), Vasie Edwards Jr. (Bnai, 10 children 8 grandchildren), Marcus Mays Jr. (2 children). James Henderson II-Pumpkin. 7 Aunts: Bobby Henderson, Fanny Johnson, Ava-Honey Henderson, Shirley Christy, Bernice Ivory, Ophelia Brooks, Edna Jones; 3 Uncles: Alexander-Ellic Jones, Ronald Jackson and Winfred Henderson; a host of cousins, friends, and extended family.

ANTHONY STEWARD, the son of Barbara Hawkins (Stepfather Joseph Hawkins) and James Henderson of Aberdeen, Maryland; was born on January 28, 1969 at Johns Hopkins Hospital and raised in Aberdeen, Maryland. He departed this... View Obituary & Service Information

The family of Mr. Anthony Lemmel Steward created this Life Tributes page to make it easy to share your memories.