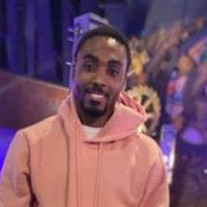 Angelo Calvin Clary, son of Angelo John Clary Jr. and Jennifer Jordan-Langley, was born December 15, 1989 in Baltimore, Maryland. He departed this life suddenly on April 25, 2022. In his earliest years, Angelo was also raised by his paternal grandmother, Denise Clary (Granny), Vernell Watkins and Granny’s best friend, Ms. Mary, until her passing. Angelo was affectionately referred to as “Fat Baby, Sweet Baby and Mr. Bear” as a child. The nickname “Fats” was carried into his teen and adult years even though he shed those baby pounds early on. Angelo received his education in Baltimore City, Virginia, and Nevada Public School Systems. He enjoyed spending time with his kids and family. He enjoyed eating crabs, cracking jokes, watching baseball and football (he was a big Ravens fan), listening to music and playing video games. He was an exceptional basketball player and exceled in football. He loved being bossy, rapping and DJ-ing. In his spare time, he was an Assistant coach to the Middle River Renegades. To know him was to love him. Angelo had two daughters, Aziyah Clary from his union with Iesha Carmichael and Zoe Clary from his union with Izabela Engel. These two precious gifts from God were the best gifts he could ever receive. He knew then what true love was. Although he was a young father he learned quickly how to become a loyal protector. He adored his daughters very much. Love ones who cleared the way for Angelo are paternal grandmother, Denise Clary; Mary Hall, maternal grandfather, James Johnson; paternal great grandmother, Peggy Beckett; maternal great grandfather, Eugene Jordan; uncle, Dennis Clary; cousin, Darnell Rice; nephew, Davin Thomas; niece, Da’Neria Thomas, (uncle) Lamar Rice, (aunt) Tracey Rice and a special brother Juanito Mosquito.

Angelo Calvin Clary, son of Angelo John Clary Jr. and Jennifer Jordan-Langley, was born December 15, 1989 in Baltimore, Maryland. He departed this life suddenly on April 25, 2022. In his earliest years, Angelo was also raised by his... View Obituary & Service Information

The family of Mr. Angelo Calvin Clary, created this Life Tributes page to make it easy to share your memories.