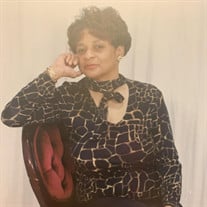 On Monday, July 26, 2021, our loving mother, grandmother and great-grandmother, Angela Betty Gray closed her eyes and fell into an eternal sleep in Silver Spring, Maryland.   Angela, the daughter of Flora Morgan and the late Elbert Gaynor Sr, was born in Philadelphia, Pennsylvania on December 1, 1951. At an early age, Angela moved with her mother and siblings to Baltimore, Maryland. She attended Baltimore City Public Schools and graduated from Douglas High School in 1969. She met David Farmer in her early 20’s. At that time, she fell in love and from that union they had a son, David James Gaynor. Being a strong-willed, no-nonsense type of woman, she took on a job working in a predominantly male led field. While doing construction work, she met a nice gentleman by the name of James Gray Sr. They became quick friends, and he went on to introduce her to her future husband, Carey D. Gray Sr. From that union, she had two beautiful daughters, Caresse D. Gray and Carrah D. Gray. Angela B. Gray was a loving mother, grandmother, great-grandmother, and friend. She was an avid reader and loved to express her thoughts and feelings in written form. Angela was also very creative. She enjoyed drawing, sewing, and creating various dolls. Being a jack-of-all-trades, you could find her mowing the lawn in the spring and summer, shoveling everyone’s snow in the winter, and if not outside, she’d be in the kitchen working hard preparing delicious meals for her family. Our mother’s heart and arms were always open to those who needed her. She often shared great advice, wisdom, and support, especially when it came to her family. She loved everyone and was willing to share not only her story but her entire life with others. There is no doubt, what she loved most in this world was her children. She was extremely proud of them and made sure they knew it. Our mother will be missed, loved, and never ever forgotten. She leaves to cherish her memories: two daughters, Caresse D. Floyd (Barry Floyd) of Glen Burnie, Maryland, and Carrah D. Walker (Rodrico Walker) of Culpeper, Virginia; four grandchildren, LaSante L. King, Keyara D. Morgan, Nia L. Eskridge and Treyvon P. Morgan; one great-granddaughter, Lauryn E. Eskridge; her mother Flora Morgan; four sisters, Sylvia Gaynor-Woodard, Kathy Hill, Cerisa Speight, Lori Phillips; three brothers, Elbert Gaynor Jr., Michael Morgan, David Morgan all of Baltimore, Maryland. She was preceded in death by her father Elbert Gaynor Sr and two brothers, Marvyn Gaynor Sr. and Junior Lee Morgan.

The family of Ms. Angela Betty Gray created this Life Tributes page to make it easy to share your memories.