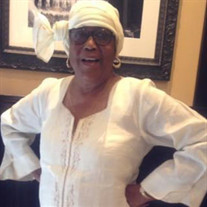 The Lord is my Shepherd… Our beloved Addie Rebecca White Bagley was born the eldest of five siblings to Mazola White and the late Westley White on October 11, 1943 in Sumter, South Carolina. She departed this life on October 20, 2020 to be with her Lord and Savior Jesus Christ. She was educated in the public school system and her family later moved to Baltimore, MD in 1955 where she completed studies in the Baltimore City Public School System. Early in life she worked in the cotton fields of South Carolina. Because both her parents worked outside the home, Ms. Addie was much the care-taker of her younger siblings even teaching her sister Rosanna how to tie her shoes. She was a firm believer in having her own money so she baby sat as a teenager and often worked as a day farm laborer. Ms. Addie, as she affectionately told people to call her, worked over 20 years at Provident Hospital as a dietician from where she retired. While there, she supported and provided patients as well as staff with meal planning and lifestyle choices. Her influence lasted beyond her years at Provident as colleagues and patients alike became family. Lifelong memories were created; she was more than life! She was the epitome of LOVE! Ms. Addie was baptized on August 31, 1973 under the leadership of Rev. Douglas I. Miles at Brown’s Memorial Baptist Church. She was a true disciple and made sure her children were regular in attendance! She loved to sing on the choir and participate in the ministries of the church. She later attended St. Abraham Baptist Church under the leadership of Rev. Clarence Yerby. On February 20, 1994 she joined the Koinonia Baptist Church where her faith grew even stronger in the Lord. Ms. Addie was a faithful member in Kingdom building and continued as a dedicated member of the choir, Sunday School, and Bible Study even through her years of sickness. She adored her church family, from the youngest to the eldest. After struggling for years with emphysema, in 2003 she was the grateful recipient of a lung transplant. She awoke from the surgery singing “At the Cross”. Always ready to be a witness for the Lord, Ms. Addie would often lend a word of encouragement to those who she encountered in her travels. She reminded them to “KEEP PRAYING and TRUST IN GOD”. Her children would tell her to leave those people alone but she didn’t stop. She shared her testimony of how God took care of her and always made a way out of no way. She truly didn’t mind telling her story and would quote her favorite scripture, Psalm 23. Ms. Addie loved her family and beyond. She enjoyed gatherings with lots of laughter and delicious food. She was known to order two entrees when out to dinner! One of the many treasures of her family was her children, whom she loved and adored beyond measure. Like any good mother, she gave unselfishly of herself to ensure they had the best she could give…teaching them about God, instilling in them to do right by others, and to always take care of each other. Another treasure was her one and only sister, Rosanna, who she affectionately called, Leading Lady. The two had an unbreakable bond beyond sisters, they were best friends! Ms. Addie’s was a true woman of God. She leaves to cherish her memory, her mother Mazola White; children Milton Newsome, Sarah White, Tracy Newsome and Nicole Scruggs; sister Leading Lady Rosanna Miles(Bishop Douglas Miles); grandchildren Christopher Irving, Kisha Marcia, Jermell Stephan, Joshua Maurice (Taylor Kathryn), Stacey Sarah-Tranice, Caleb Josiah, Sydnie Nicole Elizabeth; great-grandchildren Sha’ree Monae and Roman Antonio, and a great-great grandchild, Kelsie Alyssa, nephews, Harvey Eugene and Rev. Dante Miles, and spiritual daughter, Yvonne Chandler and a host of relatives and friends.

The Lord is my Shepherd&#8230; Our beloved Addie Rebecca White Bagley was born the eldest of five siblings to Mazola White and the late Westley White on October 11, 1943 in Sumter, South Carolina. She departed this life on October 20, 2020 to... View Obituary & Service Information

The family of Ms. Addie Rebecca Bagley created this Life Tributes page to make it easy to share your memories.

The Lord is my Shepherd…
Our beloved Addie Rebecca White Bagley...